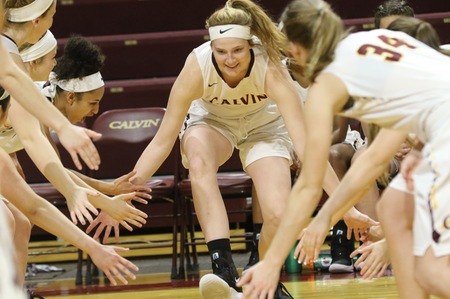 Come and join the Calvin College Knights Women’s Basketball Day Camp. It is inviting all girls entering grade 5 up to grade 8 at any skill level. This basketball day camp is a four-day event that is set to run from the 17th of June until the 20th of June. It’s daily schedule is set to start at 9:00 AM and end at 3:00 PM. In addition, this basketball day camp is going to take place at the state of the art Van Noord Arena which is on the Calvin College campus. This training program will include instructions that will develop fundamental skills like shooting, passing, rebounding, free throws, ball handling, and foot work, There are also 1v1, 3v3, and 5v5 games. The camp registration fee which includes a free Calvin Knights camp t-shirt is $175 per player. The program is set to maintain a low camper to staff ratio so registration is first come first serve.

Running this basketball day camp is the Calvin College Knights women’s basketball coaching staff. Current women’s basketball players are also in attendance to help facilitate the program. All the camp instructions and groupings are in accordance with the player’s age and skill level.

Calvin College is a private, coeducational, liberal arts college in Grand Rapids, Michigan. It is an affiliation of the Christian Reformed Church and the Council for Christian Colleges and Universities. The institution is also a member of the Calvin Theological Seminary and the Council of Independent Colleges. Calvin College is also part of the International Association for the Promotion of Christian Higher Education. Moreover, the institution is 1st in the Regional Colleges Midwest in the 2017 edition of the US News and World Reports Best Colleges rankings. Likewise, it is also 1st in the Best Undergraduate Teaching rankings. Currently, the student population is around 4,000 with a 46 percent male and 54 percent female students gender distribution. The student to faculty ratio is 13 is to 1. In athletics, Calvin College has 21 intercollegiate men’s and women’s sports teams. These teams are campaigning in the Michigan Intercollegiate Athletic Association of the National Collegiate Athletic Association Division III. Their nickname is Knights. Correspondingly, maroon and gold are their identity colors.