Come and join the Le Moyne College Dolphins Men’s Basketball Prospect Camp. It is a single-day event that will fall on the 23rd of July. It will take place at the premiere Ted Grant Court which is on the Le Moyne campus. This basketball prospect camp is inviting all boys in grade 9 up to grade 12 who dream to play at the collegiate level. In addition, this high-level basketball training program will cover ball handling, passing, moving without the ball, and perimeter defense drills. It will also provide sessions for improving rebounding and post defense skills. This camp is going to accommodate overnight and commuter campers. The camp registration fee which includes lunch is $50 per player. Registration is first come first serve.

Moreover, running this basketball prospect camp is the Le Moyne College Dolphin men’s basketball coaching staff. It is going to be a physically demanding but fun college-like basketball training experience.

Le Moyne College is a co-educational, private Jesuit college in Syracuse, New York. The name is in honor of Jesuit missionary Simon LeMoyne. It is currently offering around 700 courses. Moreover, Le Moyne College is an affiliation of the Association of Jesuit Colleges and Universities (AJCU) and the National Catholic Educational Association (NCEA). It is also part of the Association of American Colleges and Universities (AACU), the Association of Colleges and Universities of the State of New York (ACUSNY), and the Association to Advance Collegiate Schools of Business (AACSB). Its latest undergraduate students population is around 2,700. 39 percent of this undergraduate student population are male students and 61 percent are female students. This undergraduate student population is also through a selective enrollment acceptance rate of 65 percent. Correspondingly, the college’s student to faculty ratio is 13:1. Le Moyne College is among the region’s top academic institutions. As a matter of fact, the college is 16th in the Regional Universities North of the 2017 edition of the US News and World Reports Best Colleges rankings. In addition, it is 4th in the Best Value Schools ranking. Green and Gold are Le Moyne’s identity colors. The institution has 21 sports teams which are called the Dolphins. These teams are campaigning in the Northeast-10 Conference of the National Collegiate Athletic Association Division II. 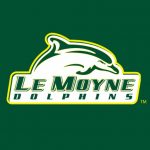