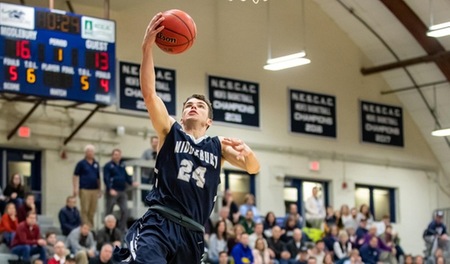 Come and join the Middlebury College Panthers Men’s Basketball Elite Prospect Camp. It is inviting all boys in grade 10 through grade 12 who aspire to play basketball at the collegiate level. This high-level basketball training program will immerse the participants to a collegiate-like training environment. It is also going allow the players to display their exceptional skills in front of the college’s recruiting staff. In addition, this basketball elite prospect camp is going to include skill development, individual and team defensive concepts, and strength and conditioning. It is going to take place at the state of the art Pepin Gymnasium which is on the Middlebury College campus. The camp will run from 9:00 AM until 3:30 PM on the 17th of August. The camp registration cost which includes lunch is $135 per player.

Running this basketball elite prospect camp is the Middlebury College Panthers men’s basketball coaching staff. Available camper spots are limited so registration is on a first come first serve basis. It is going to be a challenging but enjoyable training experience.

Middlebury College is a private, coeducational, liberal arts college in Middlebury, Vermont. It is the oldest college in the state of Vermont. The college features the Middlebury College Museum of Art which has an accreditation from the American Association of Museums. Currently, Middlebury College is serving around 2,500 undergraduate students. This undergraduate student population comprises of 48 percent male students and 52 percent female students. The college’s enrollment acceptance rate is a very selective 16 percent. Middlebury College is among the list of best colleges and universities in the country. In fact, it is 34th in the 2017 Forbes Magazine’s List of America’s Best Colleges. It is also top 6 in National Liberal Arts Colleges of the 2018 edition of the US News and World Reports Best Colleges rankings. Moreover, Middlebury College is an active member of the National Association of Independent Colleges and Universities and the Consortium of Liberal Arts Colleges. It is also part of the Annapolis Group, the Oberlin Group, and the 568 Group. In sports, Middlebury College’s sports teams are competing New England Small College Athletic Conference of NCAA Division III. They are the Panthers and their identity colors are blue and white.